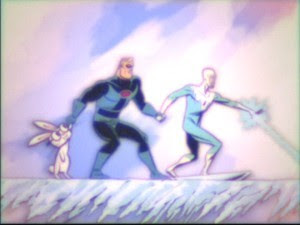 I was pleasantly surprised that the short - a send up of "Clutch Cargo" with commentary by Mr. Incredible and Frozone - got a lot of great press. Of course, people watched it because The Incredibles is such a great film!

LA Times
But the pièces de résistance are two new animated shorts: "Jack-Jack Attack," which features the youngest member of the Incredibles having some fun with his baby-sitter, Kari; and the "Mr. Incredible and Pals," a spoof of 1960s Saturday-morning cartoons. This supposedly "lost" cartoon features Mr. Incredible, his pal Frozone and their rabbit sidekick, Mr. Skipperdoo, battling the evil Lady Lightbug.

Entertainment Weekly
"The coolest extra by far has to be the cheesy, purposely poorly animated Mr Incredible and Pals cartoon....The accompanying commentary by Mr. Incredible and Frozone is the funniest thing in the entire package.
Posted by Alex Mandel