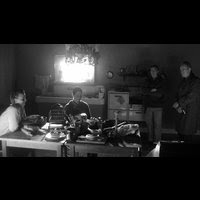 Last week, "Trifles" premiered at Pixar. It's a 30 minute live-action drama directed and screenwritten by Pam Walker. Other than Pam, the crew, including the actors, was largely drawn from Pixar staff.

Seeing the final film still gives me chills. It was the second drama I've scored (after Violet) and it felt like a step forward for me.

Scoring and writing the song for this 30-minute film was quite an adventure over the past year. Working with Pam to find the heart of the story was a pleasure . Also, being asked to write and record an original song in a week was a thrilling experience - also the first time someone else (Pam) has sung a song I've written.

I'll also post score excerpts and the song in the downloads section. The film has been submitted to festivals, so hopefully some of you will have a chance to see it.

Update: "Trifles" will be screening at the Reel Women International Film Festival on March 28, 2009 in Hollywood. For more details, click here.

Another Update: I've posted the two songs I wrote for "Trifles" - Share Your Burden is sung by Pam Walker, who also adapted and directed the film. You can find them in the "Mandel Music Downloads" section. -AM
Posted by Alex Mandel