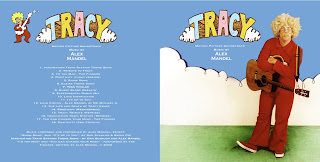 Last year Dan Scanlon released "Tracy" with a premiere at Pixar. Dan and I had been working on it for about 4 years. Since then it's been doing the film festival circuit. Hopefully it will be available on DVD soon; it's a hilarious and surprisingly touching film. Dan found some spare time from his Pixar day job to do artwork for the soundtrack album. We'll print a very limited number of these CDs, so please contact me if you'd like a copy. Here's the album art (Thanks Dan!)
Posted by Alex Mandel