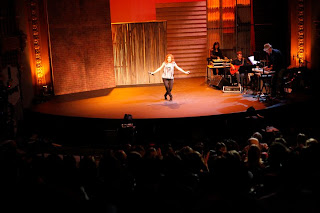 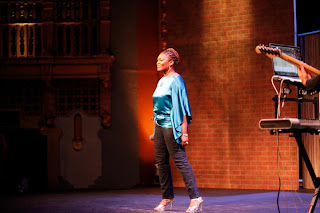 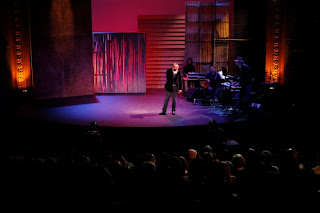 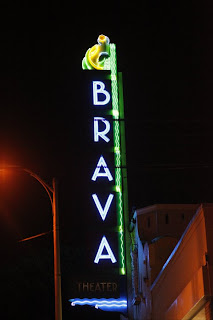 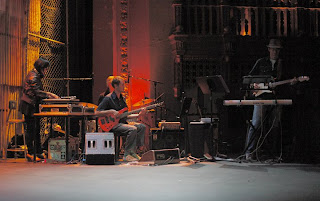 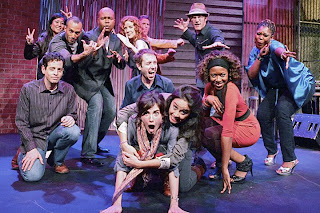 Snap Judgment, the NPR weekly radio show hosted by Glynn Washington, went on the air in June. The response has been great, with Ira Glass calling it the best new thing he's heard on NPR, and over 15,000 Facebook fans to date.
The first TV show, with me acting as musical director/composer, that we shot at SF's Brava Theater back in June, aired nationally last week. (Facebook users: check out the titles featuring stop motion animation and my theme song here.) The radio version aired on NPR in August; you can hear it here.
In September we took this episode 1 live show on the road, flying to Denver for the annual Public Radio Program Directors Conference. On the 38th floor of the Hilton, we performed for an enthusiastic group of NPR folk. Glynn, Joshua Walters, Joyce Lee, Jamie DeWolf and the band roamed the streets of Denver at night, in search of schnitzel & waffles, pickles and beer...and we were not disappointed. (If there is a recording of our funk beat to Glynn chanting "IRA GLASS! IRA GLASS!" I would like to hear it.)
Just last Friday, the Snap returned to the BRAVA THEATER to film not one, but two additional TV shows -- "Animal Tales" and "True Confessions." Whereas the first episode mined local talent exclusively, this time the locals were joined by a group of storytellers who flew up from L.A.
Once again, I had one hour with each of the nine storytellers to pitch them my score ideas, and collaborate with them. This is such an intense and enjoyable process. I've listened to their stories, composed 2 or 3 themes, and then get to meet the storytellers for the first time, pitch them my musical interpretation of their pieces. I have an amazingly sensitive group including Dave Brandt -- percussionist extraordinaire -- and Tim Frick, bassist -- both of whom I sometimes think are reading my mind. We were also joined by DJ Deeandroid on the turntable, who fit right in.
Some amazing things happened during these sessions. Tabitha Christopher, who hails from St. Thomas has a great story about her pet goat Big Jim. Without giving too much away, I asked her if there was some sound or song that she heard in St. Thomas growing up that meant it was meal time.... and she broke out in this traditional song about meal time! Too good to be true. Dave Brandt busted an energetic souka beat, I adapted the melody on guitar and we had a tune that invoked the setting of the piece and reflected Tabitha's energetic delivery. A great moment.
Erol Dolen's story evolved in a fascinating way. I felt it was a serious piece, and had composed a somber, longing theme. To contrast, I had also written a Fellini-esque accordian piece for a scene in a Russian brothel. Erol and Glynn edited the piece and the end result was, I think, very powerful.
Katherine McEwan hails from England, and she had a great piece about how Americans assume she grew up on the set of Sense & Sensibility, when her town in Northern England looked more like The Wire.... I had a blast with this one, marrying a Baroque Harsichord line with a hip-hop beat. It flowed smoothly and the results were great.
Scott Kravitz has a piece about how he stole his pet Dog from a homeless teenage girl. The tone of the piece is very understated and clever, but there is heart to it, too. I took a cue from a line in the piece that referenced Phillip Glass and the soundtrack from "Garden State" -- the line was cut, but the music evolved from those two touchstones. This piece really came alive on stage; the audience responded to it, and the music added some subtle emotion to Scott's understated but effective delivery.
Joyce Lee, poet and storyteller extraordinaire adapted her stranger than fiction piece about a perfect boyfriend who turned out to be too good to be true. This was the second time working with Joyce, and this time I was glad the music really complemented her piece -- including some hilarious James Brown hits and Sam Cooke/Al Green R&B stylings.
There were great pieces too from Kate Ascot-Evans, Anneke Jong & Thayer Walker, and of course Mr. Glynn Washington. We had performed Glynn's "Dancing While Black" in Denver, and it had killed there, but on Friday night it was even better, captured for posterity by the cameras. Glynn tells his stories differently every single time. I love it. It's collective improvisation, the spirit of Jazz, and it keeps you on your toes. You've got to keep your ears and eyes open, and follow his feet.
Can't wait till these two episodes air, I feel like we're evolving the medium of live storytelling with live music each show we do.
Posted by Alex Mandel