I've been fiercely preparing for my scoring session this week at 25th Street Studios for a great film I'm scoring, written & directed by Anthony Lucero, called East Side Sushi. More about that soon....

In the meantime.... this weekend NPR airs our latest Snap Judgment LIVE show. The performance was recorded live at LA's Nokia Theater on October 12, 2013 in front of a crowd of over 2500 people.  Our fearless leader Glynn Washington and I were joined onstage by my bandmates David Brandt and Tim Frick.


Our first storyteller "Magic" Mike McGee talked about what it was like to be a kid who wore diapers. Although the content was serious, the tone was bittersweet and lighthearted, so I opted for a John Hughes inspired score, as Mike's parting gesture reinforces.


Gypsee Yo's intense tale from her youth in Albania speaks for itself. I had to Google what Albanian music sounded like. It's got a nice beat. Plus I got to bring in the trusty accordian samples -- always a plus -- to evoke the Iron Curtain.

I've enjoyed seeing a lot of Shannon Cason recently. First at our show in Ann Arbor, then an awards show in Chicago were I got to meet his lovely wife, and then onstage in LA for this brutally honest true tale. We talked about our shared love for Film Noir, so my score reflected those conversations.

Shane Koyczan walked into rehearsal, Tim Frick perked up. He recognized Shane from his amazing TED talk.  Shane wanted to sustain a mood throughout this piece with subtle variations, he played a few notes on the piano, and I came up with this piece on the spot. A great story that's close to my heart. Very happy with how this turned out.

Glynn wrapped it up with a story we performed once before in Ann Arbor, and this time we got it right. It was a trip to see Glynn up there on the jumbotron!


There were also great stories from Joyce Lee, Josh Healey and James Judd that will hopefully see the light of day sometime soon. Jamie DeWolf, storyteller and great-grandson of L. Ron Hubbard, told his classic story about growing up in the shadow of L. Ron, and we haven't seen him since. Just kidding. 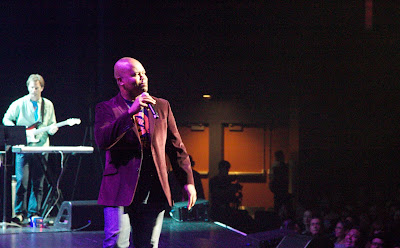 The show ended with a standing ovation. 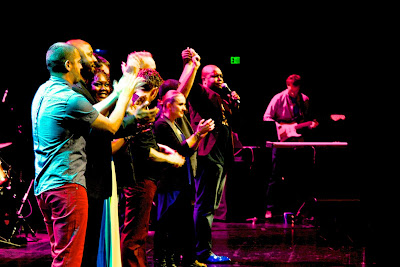 Glynn is always generous in acknowledging me and the band, as he does here.

Glynn and Mark have done an amazing job finding these amazing storytellers, and I'm always proud to collaborate and share the stage with them and the band.